On my last post, I wrote about some of my goals for 2017 (reading more books, writing often, daily meditation, etc.) and also personal challenges that would hopefully  include 12 adventures—new places and/or new experiences:

1) going to a new place—by plane, train, automobile or even on foot, and not necessarily far from where I live.

2) by experiencing something new, something I have never done before—whether taking a class for personal growth, learning a new craft, or participating in something within the community.

This is my personal challenge #1 (a disclaimer and my sincere apology to my blogger friends that if you have voted for Trump, this blog may not be properly suited for you):

I was hoping that the year 2017 is going to be a quiet year and a lot less eventful than the past couple of years. So far, politically speaking, it’s been a wreck and the year just started! Since Donald Trump was sworn in as the President of the United States, I haven’t been able to focus on accomplishing any of my goals I mentioned in my last post, such as reading the books I’ve collected over the years. Instead I’ve spent the majority of my days catching up on the news. His first week was a whirlwind of activity with unimaginable executive orders and one after the other caused my world to crash, spiraling down quickly. However, the upside is I’ve been able to take on challenges far from what I thought I was capable of accomplishing.

The month of January was all about pushing myself. I’ve gone outside my comfort zone, doing things I wouldn’t have done in the past, and experiencing a whole new world!

The Presidential election in the United States in November left a big hole in my heart. I’ve never cried in any elections in the past but I did with this one. I cried until 4am the next day, and the days that followed. I was so shocked at this outcome and for a man who’s lacking decency and proper diplomacy is now the 45th President of the United States. He ran his campaign by pandering on xenophobia (by insulting immigrants, accusing Mexicans as rapists and thieves, by suggesting a Muslim ban); by demeaning women as evident on the tapes (bragging about grabbing them by their genitals); and by spreading hate (encouraging violence in his rallies). For the first time in my 25 years as an American citizen, I was afraid and embarrassed. I feared for my country, for Americans without privilege, and most especially for my sons.

A Trump presidency became much more personal when he campaigned for the repeal of the ACA—Affordable Care Act (nicknamed by the republicans as Obamacare). Before the year 2010, insurance companies can deny coverage to people who have pre-existing conditions, have imposed a lifetime cap on patients, and children under 26 years old did not have the privilege to be covered under their parents’ insurance. These provisions were changed when the ACA became a law.

In 2010, my younger son was first diagnosed with his leukemia and if it hadn’t been for the ACA, he could have been denied insurance the second time his cancer came back due to pre-existing condition and lifetime cap. Also his medical bill has already accumulated close to $2 million (his lifetime cap was $3 million). Trump said he won’t take away these provisions but I honestly do not know what to expect. His administration has been caught in web of lies that I find it hard to trust them. As far as I’m concerned, the law is already in place and I see no reason to repeal it.

Worried about where the healthcare’s direction is going under the Republican Party, it was now up to me if I should sit back and wait for others to do the work. Or I can challenge myself to become active and be a part of the solution.

I called my state representative to  remind them that there will be millions of people who will get hurt, including my son, if Obamacare was repealed without a viable replacement. I also joined local Facebook groups, where members are mainly made up of women, who are active in the community, organizing rallies, protests, or phone calls to legislators whether it be resisting Trump’s cabinet appointments or demanding to restore democracy. They are among the millions of Americans nationwide who resist Trump’s unconventional and dangerous leadership.
And this has become my new world, being a part of the resistance movement.

Together with these women (and some men), we went to protest at our senator’s office (Ted Cruz) regarding the future of Obamacare. I was chosen to speak with the senator’s staff, explaining to him why Obamacare is important not only to my family but for millions of Americans with pre-existing conditions who may lose their insurance coverage. It was the very first protest I participated and guaranteed, there will be more to come.

But the most empowering event I participated thus far was the Women’s March on January 21, a day after Trump’s inauguration. I couldn’t fly to Washington DC so I asked two of my friends if they were interested in joining me to do The Women’s March on Austin. There were several women’s groups who organized round trip bus transportations to and from Austin. At 7:30 am, we left Dallas and it took three hours to get there with a restroom stop along the way. The bus was full of women with their pink knitted “pussy” hats  and/or “nasty women” shirts. We were all proud to be part of the (estimated 4 million) marchers worldwide, who protested against Donald Trump and his authoritarian-like regime. However, the protest was not only about Donald Trump. It also covered issues such as:

1) women’s issues— (lashing out against his treatment of women, with his infamous line, “grab them by the pussy”;

2) healthcare— (as I already have explained);

3) immigration issues—building a wall on the border of Mexico and the U.S., deporting (and separating families) the 11 million undocumented immigrants, putting a ban on Muslims, etc.;

3) environment—the Republicans are known to be climate change deniers; 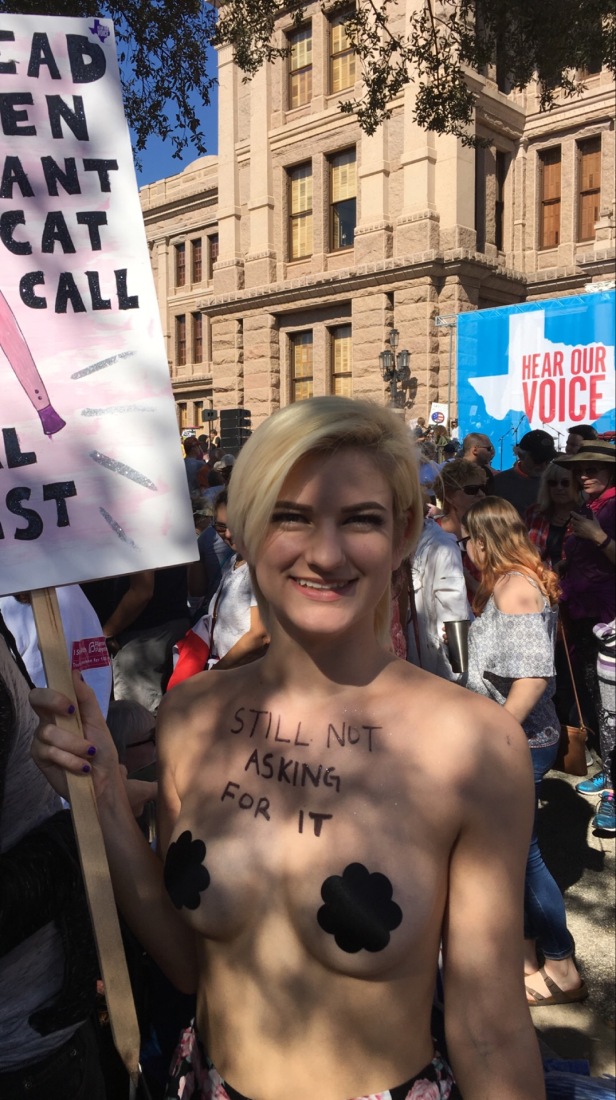 4) his choices of cabinet members who will definitely not drain the swamp but instead will benefit the top 1%;

5) LGBTQ issues—it is especially concerning that with a Vice President like Mike Pence who was known for favoring discrimination against the LGBTQ community, we are now going backwards. Marriage equality was just passed under the Obama administration which states that a person can marry whoever they love regardless of their sex and gender orientation but that is now being threatened under this new administration.

Everyone initially gathered at the Capitol. Then we slowly made a loop around South Congress, which took about an hour or so. It was nonstop chanting and we were getting cheers from onlookers. It was uncomfortably warm that day and the sun was shining bright on my face but the heat didn’t bother me. It felt great. For the first time in months, I felt alive.

The march was not just for myself but also for my sons, for everyone’s sons and daughters, and for the men and women whose voices needed to be heard. 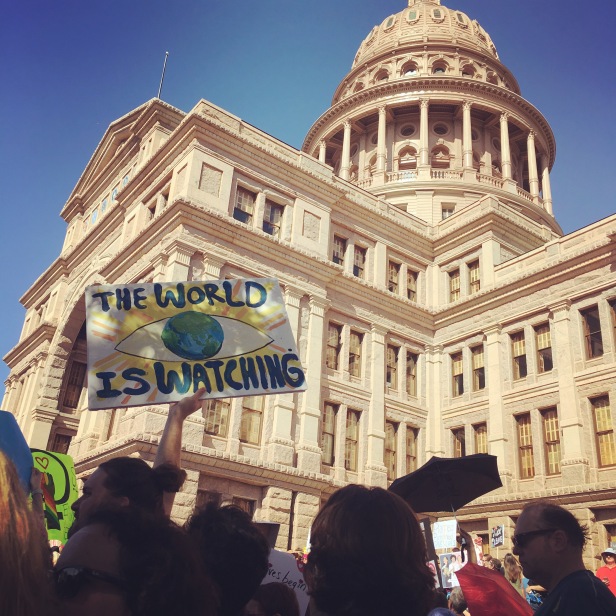 The tears I shed on election night had transformed me into a much better American. However, my activism won’t begin and end with Trump. Complacency is no longer an option because America is changing and she will always need my voice. My voice, together with million other voices, will be heard. Because this is what democracy will always look like.

37 thoughts on “Activism in the wake of a Trump Presidency”