We did something unconventional this morning. We woke up at the crack of dawn to attend the Easter service at Oak Point Park, an outdoor amphitheater near our house. But that’s not the reason why it’s unconventional: it wasn’t a Catholic service.

I’ve  been raised in the Catholic faith all my life. I went to Catholic schools since kindergarten until we migrated to California when I was fifteen. I almost attended the all-girls Catholic school near  my dad’s office in Los Angeles, however, my cousin convinced me to go to the public school she attended. Boys, she said, were important part of any teenage girl’s life. And so I did (which was almost shocking that my parents agreed). 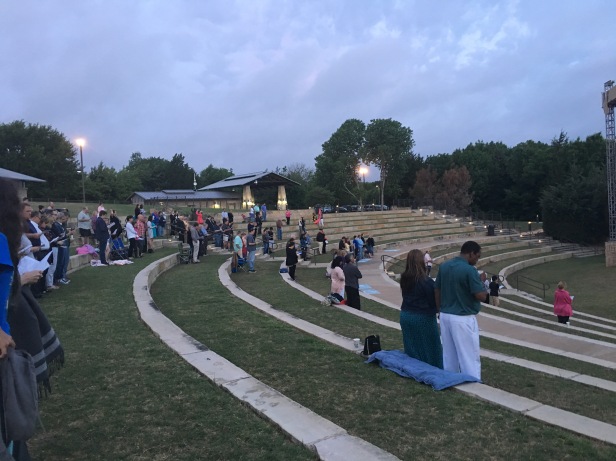 It was a beautiful service this morning. They had a band singing gospel songs. The pastor’s sermon was about coming back to life, both literally and figuratively. It’s about appreciating every moment of your life. The sermon felt as if it was intended for my family since we have “died”, not only once but twice  before. And both times we have gotten back up, picked up every broken pieces, and moved on. However, we were much stronger the second time around. My younger son reminds me that this is not his second chance at life. In fact it’s his third. At a young age of 12, he is ahead of his years. He has experienced life not many adults have.

As for me, I feel more spiritual now than I have ever been but it has nothing to do with religion. My old self  would’ve thought going to an Easter service, other than Catholic, sacrilegious. But my new found spirituality is centered on being more open and accepting of things I have not been accustomed to.

This year, I decided I was going to be a new person, challenging myself to new adventures and experiences. I have actually amazed myself at keeping up with my personal challenges, no matter how difficult it was. Going to a religious service that wasn’t called “mass” was a challenge. But I did it and it’s uplifting to be less constrained by my own ideals or others people’s ideals.

This is my personal challenge #5!