I’ve been consumed with my younger son’s relapse (his third bout with cancer) lately and haven’t had the chance to finish the drafts I wrote on my trip to Morocco. I received a photo book of my entire trip in Morocco from KimKim, the travel agency I used. I had tears in my eyes while glancing at the pictures, reminiscing the wonderful moments I spent there with my older son. I decided to finish my drafts and use writing as a therapy, providing me an escape from the stresses and realities of my daily life.

After having our delicious breakfast in our riad, we left Chefchaouen to our next destination: the 1200-year-old city of Fez. The drive to Fez took all day because we stopped in Volubilis, famous for its ancient Roman ruins, situated near the city of Meknès. Our driver, Saíd, asked if we wanted a guide for 200 dirhams. I hesitated, not because of the price (that’s only around $20), but because I wasn’t interested in spending a lot of time there. When I think of Morocco, I don’t imagine it with Roman structures or ruins. Having a guide will obligate us to listen to him for a couple of hours and I really would rather do more sightseeing in Meknès (a smaller imperial city). But my son insisted on getting one. 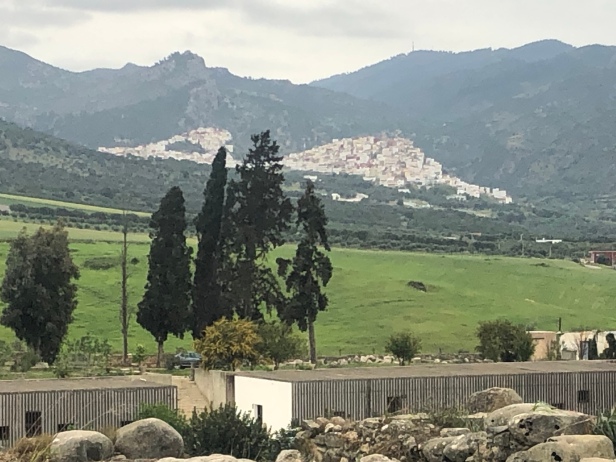 “Mom, you need to learn the history!” (insert: eyeroll)…no, really, isn’t that what guidebooks are for?

Yeah, sure, by hiring a guide, it delayed our arrival in Fez and we hardly had any time in Meknès (but more on this later). 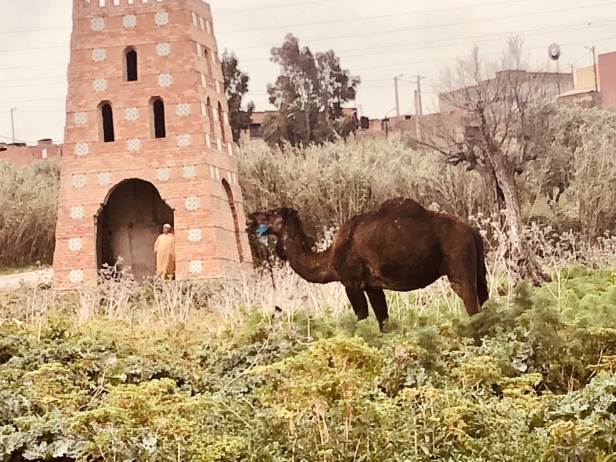 Before reaching Volubilis, I asked Saíd to stop along the way. I told him I wanted to take pictures of all the sheep we keep passing by on the side of the road. He was probably wondering and thinking what a crazy idea that was, as if I have never seen sheep in my entire life before.

(Hey, I live in Texas and you hardly see this many sheep on the side of the road in Texas okay?)

I approached the shepherd who was tending to his animals and asked him if I could take pictures of him with his herd. Lucky for me he was a friendly lad and even suggested I hold on to the rope. He asked Saíd if I’d post his picture on Facebook and perhaps become famous (lol). I don’t really know why but the stop and my brief interaction with the shepherd made my day.

It was sprinkling when we arrived in Volubilis. The weather has drastically changed and has gotten much cooler. We met with our guide and excuse me if I sound like an idiot…but the whole time I was thinking how incredibly bored I was! Just to amuse my son and the guide, I pretended to be interested. From the ruins, he showed us an affluent house where they had their own private hammam (a Moroccan bath similar to a Turkish bath). It was a light bulb moment after mentioning hammam…. I remembered I needed to make a reservation for a hammam in Marrakech. I heard the luxurious hotel, La Mamounia, has a highly rated spa. 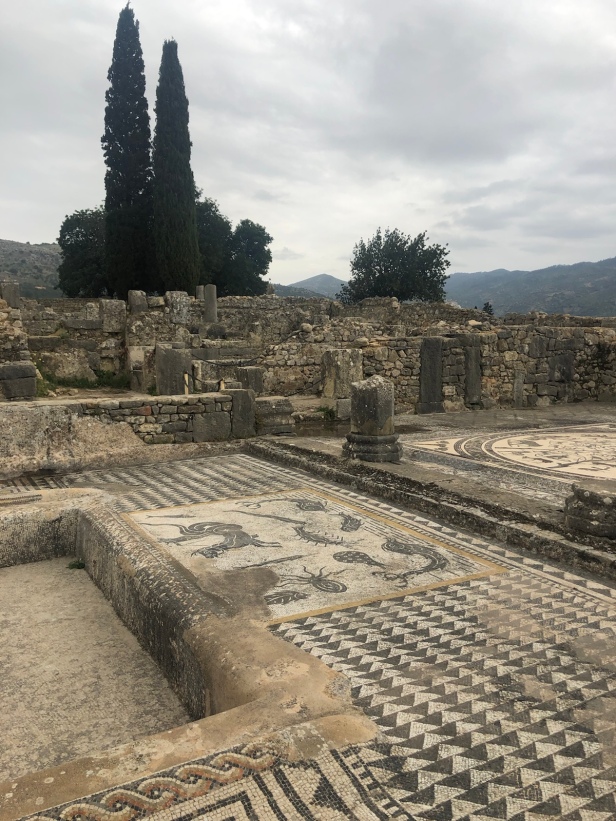 After a couple of hours we were finally done with the tour and Saíd told us we will indulge in Moroccan BBQ for lunch. “Not fancy or first class restaurant,” he warned us. My mouth was watering with the thought of eating Moroccan barbecue.

Saíd was not joking when he warned us not to expect anything fancy. It was a small family-owned restaurant facing off the street. An old man who looked like the grandpa was our server. Everything would’ve been great except I saw him touched our bread and everything else with his bare hands. (Not gonna lie, I was a little grossed out). A cat (not sure if it was their pet or wild since there were so many cats running wild) kept insisting on staying under our table. He seemed hungry and was waiting for me to give him food. As soon as they placed a plate of raw tomatoes and onions, I immediately warned my son not to eat it. “You don’t know if they washed them well,” I told him. I must’ve annoyed him and told me to let him enjoy his meal. We argued a little bit and I insisted that he needs to be a smart traveler to avoid getting sick on the road. Despite my initial repugnance, I eventually loosened up and (tried) to enjoy the food, which thankfully turned out delicious.

On our way to Fez, we briefly stopped in Meknès. Saíd parked his car and suggested to take pictures but since his English is limited and the fact that he’s not a guide, he gave us no information of our whereabouts. We walked towards a busy market, but didn’t see anything interesting. We called him after 10 minutes and told him we were ready to proceed. (Meknes is actually known for Morocco’s growing wine production but with the little time we spent in the area, I didn’t get the chance to try the local wine, something I later regret). 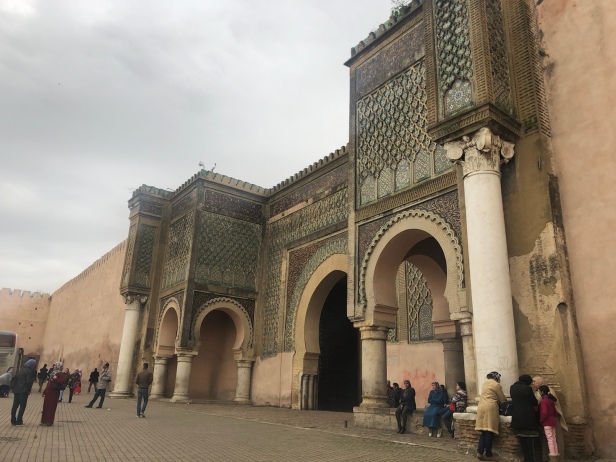 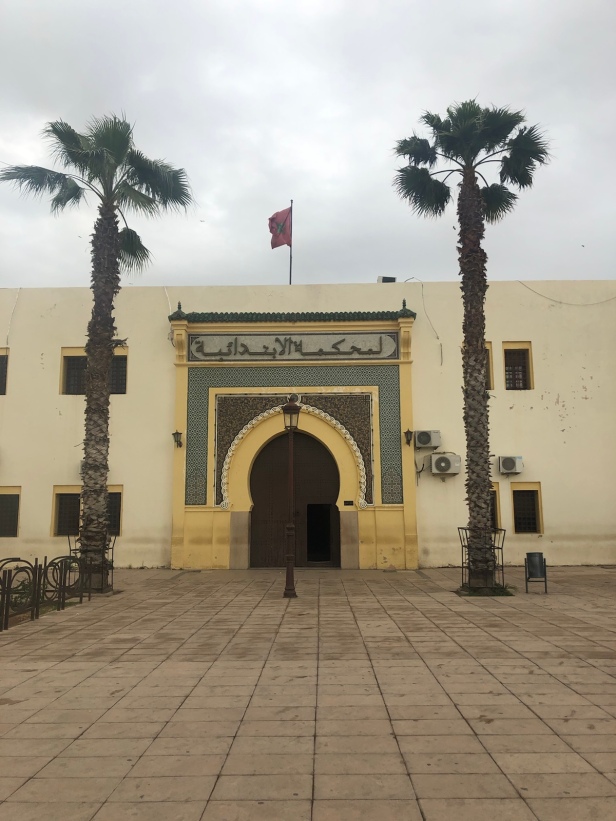 We arrived in Fez and our riad was located in the old medina. Cars aren’t allowed inside the medina, therefore we had to wait for a staff from the riad to meet us in the street. A young man appeared, took our bags, and motioned us to follow him. Saíd told us he’d meet us at the same place the next morning for our city tour with a guide. We walked inside the old medina passing through narrow alleys. If Chefchaouen is painted in blue, Fez has the earth’s tones. I wondered where the young man was taking us since the medina was starting to look residential. Then he opened a wooden door with a key and upon entering, I was totally blown away. 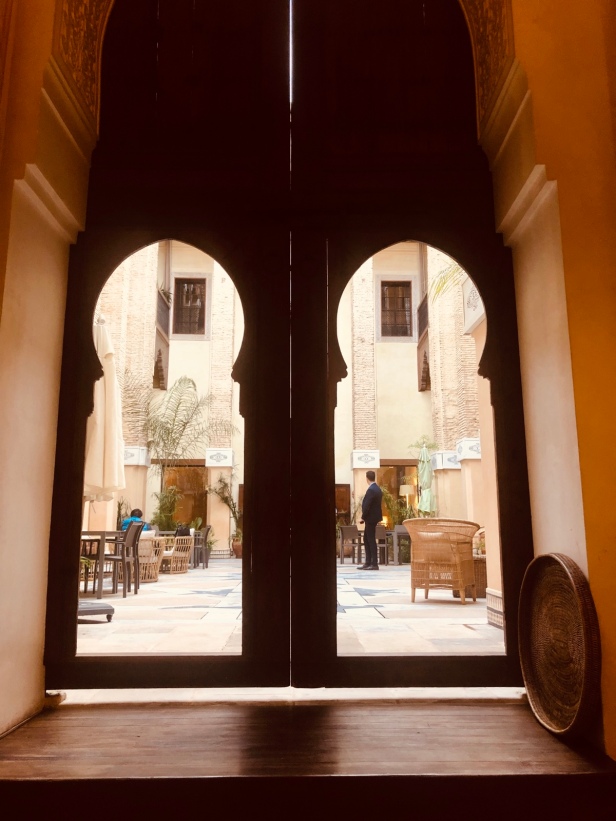 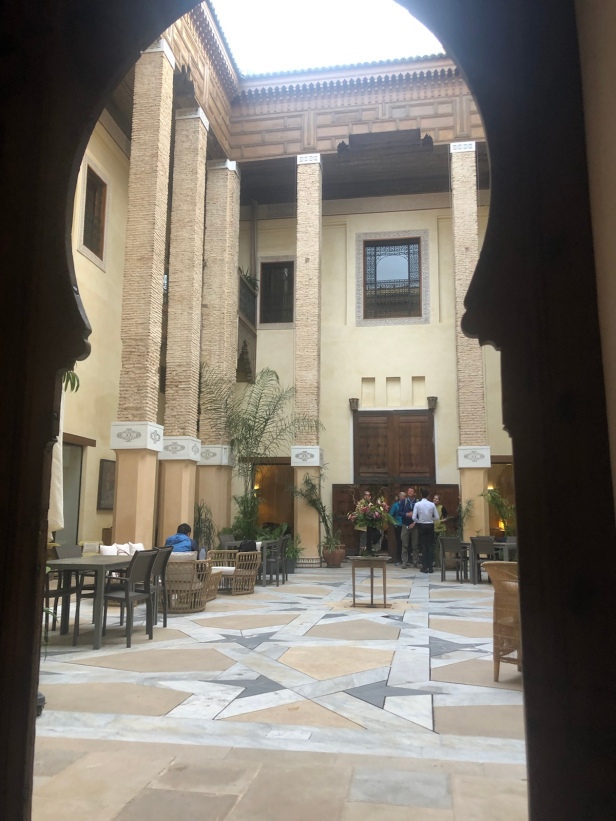 Karawan Riad is in a beautiful 17th century building located in a tranquil section of the old medina. The entire riad has only seven suites, each uniquely decorated with interesting artwork and antique pieces.

My son and I sat in the gorgeous courtyard, sipping mint tea and devouring the cookies, while waiting for someone to check us in. A staff introduced himself and gave us a brief introduction, showing the different areas in the riad (the library, the hammam, the rooftop, the restaurant, etc) available for us to use during our stay for the next couple nights. 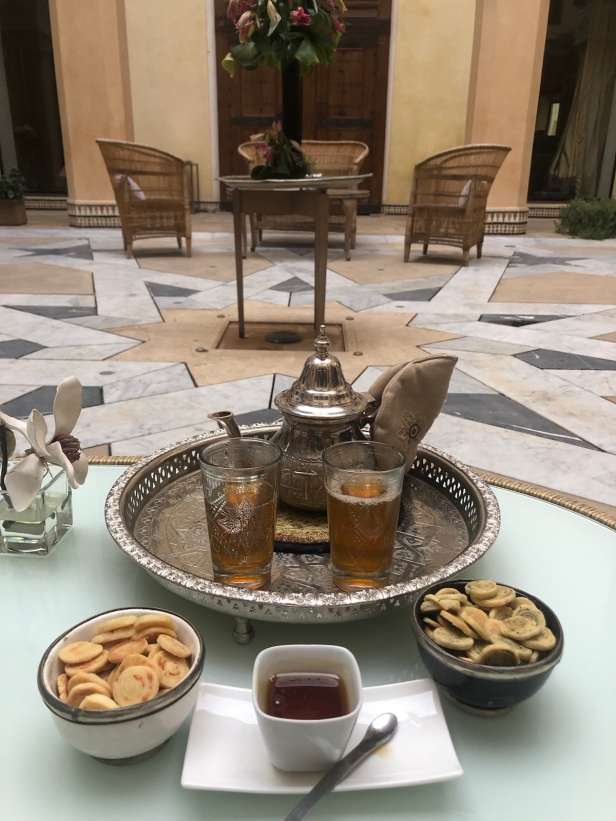 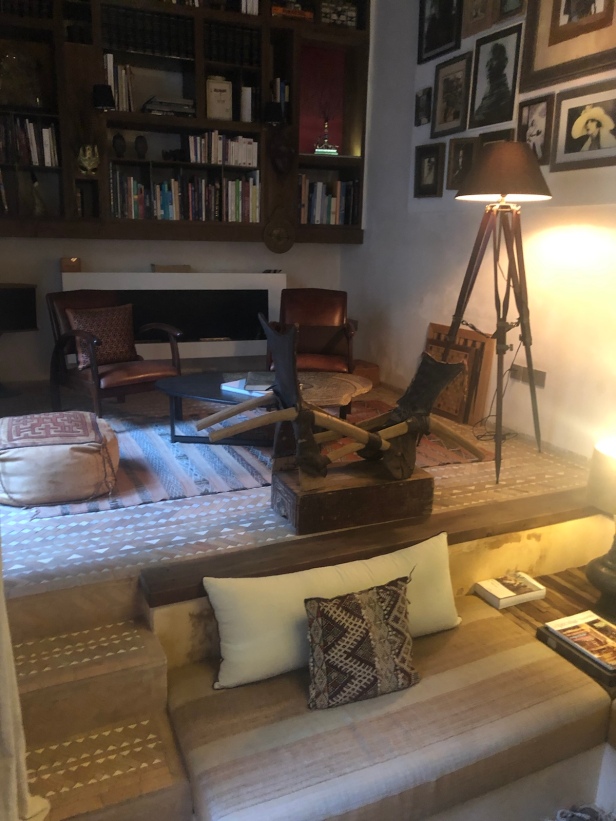 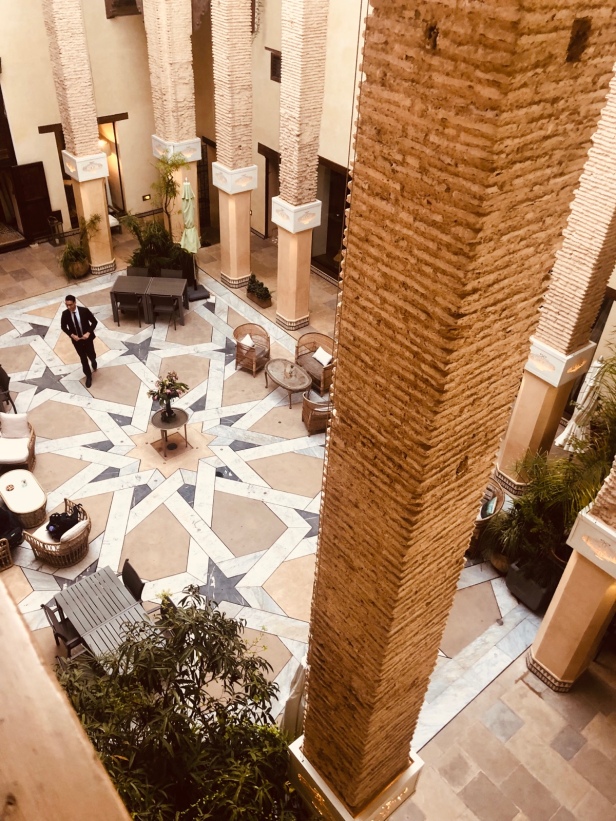 I asked about their hammam and they told us we have to make a reservation in advance. I decided didn’t want to wait until Marrakech to experience a Moroccan bath so I made a reservations for my son and I the next day.

The dinner at the riad was very well-prepared. We both ordered chicken tagine (I’m planning on trying the chicken tagine at all the restaurants in Morocco). Before the main dish, they brought small appetizer plates and scrumptious Moroccan breads (the texture is more like a pizza dough) accompanied with the refreshing mint tea. Our dessert was chocolate cake with berries!

Tomorrow is a whole new adventure, exploring the medieval city of Fez. But for now, I can’t wait to enjoy a restful night in this magical riad!

14 thoughts on “On the Road to Morocco’s Imperial City: Fez”